Continuously looking to refine and add extra unique personal touches to his successful artisanal restaurant, Alex Grimley is starting out the 2015 season at Sheer Rocks with a few new and exciting offerings. Since coming to Antigua 7 years ago to work at Carlisle Bay, Alex has consistently sought to create original food and raise the food service bar in Antigua. Apart from presenting a new Tapas menu for lunch and Tasting Menu with wine pairing for dinner, Alex will be introducing a new head chef, who will be turning up the heat and intensifying the in-house flavours.

Chef Simon Christey-French is a young British chef with an impressive culinary career. It has been quoted that, “his CV (resume) is impeccable” so judge for yourself. He was named the UK Restaurant Association’s Young Chef of the Year in 2007 sponsored by American Express and in 2010 he was named Chef of the Year. He has worked at the 2 Michelin starred Gidleigh Park Hotel in the UK, as well as with the revered Chef/ Owner Philip Howard at The Square, also a 2 Michelin starred restaurant. Simon was also head chef at Pearl in London (also 2* Michelin) and he spent a period as Sir Richard Branson’s private chef on the BVI’s Necker Island, before working as Head Chef at The Chancery, an innovative city slickers restaurant in London. 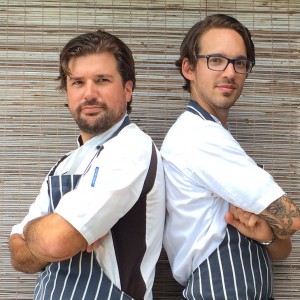 Alex explains that Simon will enhance his philosophy that emphasizes simplicity and detail. Noting that, “we work hard to use local ingredients from fishermen and farmers on island, and we only use the best, freshly available produce.”

Enjoy unhurried service, fun and low-key, dining at this dramatic, must visit restaurant. Due to the high demand and the intimate size of Sheer Rocks we recommend that you call ahead to reserve your table.

What Are You Looking For? Choose from our list…